Marisol Zamora, project manager for Airplane industry at Keymet met for an interview with Airbus A350 First Officer Christian Krohn. Keymet produces Ipad holders for EFB that are used by pilots in the cockpit and the aim with the interview was to get better knowledge of how our products are used and what future products we could produce for the airplane industry.

Mr Krohn will soon get his ATPL (Airline Transport Pilot License) and is currently holding a CPL(A), Commercial Pilot License from the Finnish Aviation Academy, and the Airbus A330/A350 type ratings. He has also around 1000 hours of flight experience with the Airbus A320 series and has now worked for three years as a First Officer.

On a normal workday, First Officer Krohn gets to the airport one hour before flight. Together with two more pilots, they briefly check how the days flight will look like; how the weather will be during take-off, on-route and at the destination, if there will be any special cargo or information from the airports and what alternative airports there are close to the destination in case of emergency.

The pilot’s responsibilities before flight is to check for any operational items affecting the flight, e.g. if the aircraft has problems. Even minor problems like a broken passenger seat is to be checked. One of the pilots perform a walk around the aircraft to check the outside of the plane, like tires and lights. Everything needs to be double checked and documented. During a flight the Captain has full responsibility over the whole aircraft and it´s safety, the co-pilot is the second to take responsibility during the absence of the captain.

Mr Krohn is well familiar with EFB laptops in holders and has been using them in the Airbus A320 and A330. The advantages are that they are easy to use and all flight information like maps can be concentrated in one place. According to Mr Krohn it is important that the holder can be turned around and that the viewing angle easily could be adjusted with one hand. It is also important that the locking and unlocking mechanism function runs smoothly and effectively since the iPad often needs to be pulled out of its holder. In the future First Officer Krohn would like to see touchscreens in all aircrafts, which you only will find in the newer aircrafts today. When using touchscreen devices, the holder must be constructed so that it will not turn inadvertently.

From a pilot’s perspective, the ergonomics is of high importance and therefore it´s important that all devices would be easily reached and easy to use. Since a pilot sits many hours in one position it would also be very important that the seats would be comfortable.

When working with the airplane industry you will often meet terms like Airborne Transponders and black box which both are parts that Keymet produces. Mr Krohn explained the difference between these two. The transponder sends different signals to the air traffic controller, example where the aircraft is. Some transponders can send more detailed information like where the aircraft is heading and at what speed. The black box, found in every aircraft, do not send any signals, but is constantly recording all data from the flight like speed and altitude. The recording cannot be stopped manually from the cockpit and these flight parameters will be stored in the box.

Luckily First Officer Krohn has not experience any emergencies during flight. He has experienced smaller mechanical problems though, like a failed brake system before take-off, but it could be fixed in a couple of hours. One of his best memories from a flight is when he flighted an A330 and came close to a thunderstorm. The air was full of electricity and flashes that made a “tesla effect” on the windscreen, called Elmo´s fire. The sight from the cockpit was awesome according to Mr Krohn. 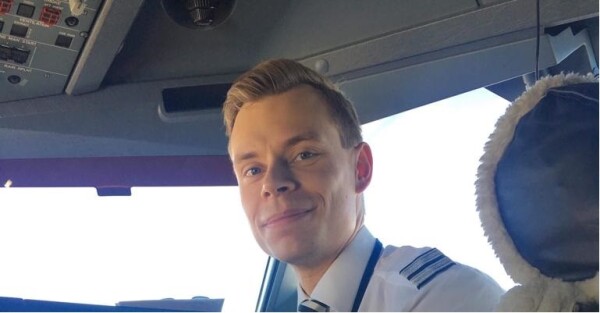